Time and space complexity depends on lots of things like hardware, operating system, processors, etc. However, we don't consider any of these factors while analysing the algorithm. We will only consider the execution time of an algorithm. 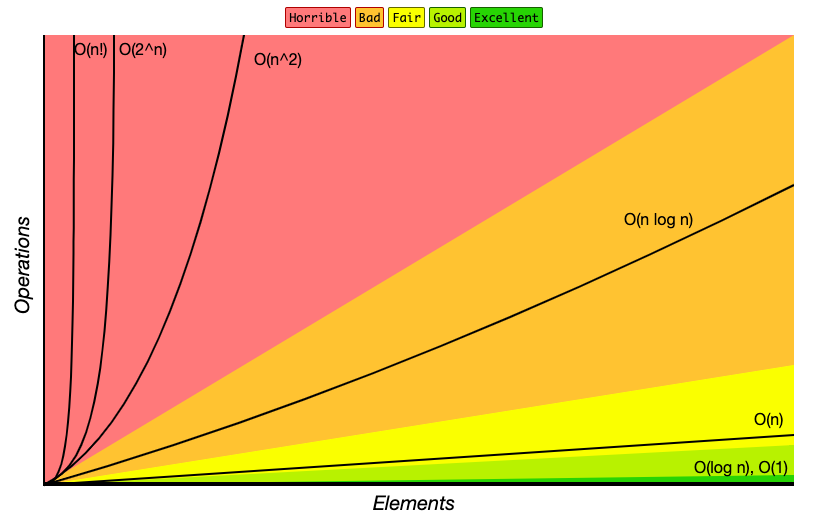 The following are examples of common complexities and their Big O notations, ordered from fastest to slowest:

No matter how you change the input size, the time it takes to get your output is the same. With constant space complexity, the amount of memory you use doesn’t change as the input size grows. Examples:

There are also a number of operations that typically fall in this category if implemented most efficiently. Usually, they boil down to doing one or more of the previously mentioned operations, like instantiating an object or looking up some property.

The thing all these operations have in common is they pretty much just do one thing, taking one step, or performing one action.

A lot of engineers get tripped up by O(1) space lol, but all this means the amount of memory you use doesn’t scale 💡 with the input size.

A mathematical concept that's widely used in Computer Science and that's defined by the following equation: log b(x) = y if and only if b^y = x

In plain English, if an algorithm has a logarithmic time complexity O(log(n), where n is the size of the input), then whenever the algorithm's input doubles in size (i.e., whenever n doubles), the number of operations needed to complete the algorithm only increases by one unit. Conversely, an algorithm with a linear time complexity would see its number of operations double if its input size doubled.

Two loops but on different arrays O(A.B) instead of O(N^2).

If n is the size of the input, then whenever the algorithm's input increases in size (i.e., n+1), the number of operations needed to complete the algorithm doubles, the algorithm is said to have an exponential time complexity. 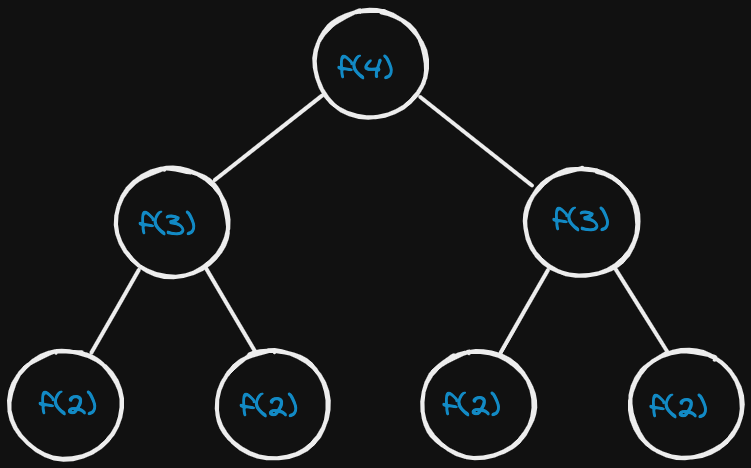 Recursive call tree similar to what happens in a fibonacci recursive function.

The factorial function (symbol: !) says to multiply all whole numbers from our chosen number down to 1. Factorial - Wikipedia.

Suppose you wanted to write a function that counted all the frequencies of characters in a string. A really simple (and efficient) way to do it would be to loop through all of the string’s characters and then tally them up in a hash map:

The runtime of this function depends on the length of the string. 1 more character, means 1 more step, so the runtime is O(N).

But what about space complexity? We’re using a few variables, but the obvious one that seems to scale up with the size of the string is the counts hashmap. The more characters you have, the more it seems like you’ll have to keep track of, so it might seem like it’s also O(N).

But the reality is that it’s actually O(1) 🤯 because you are only dealing with a finite character set. Sometimes see this big-O notation written as O(C). It’s used to express the fact that constant time/space isn’t just limited to one step or one unit of memory usage. There can be some amount of scaling up in runtime or memory usage, as long as it’s to some fixed, finite upper limit.

Bonus 2: An algorithm that took in an array of strings, sorted each string and then sorted the full array​

To sort each individual string in the array, we would start by looping through the whole array, sorting each string element, and either replacing the strings in the original array with their sorted versions, or building a new array with the sorted strings.

Then, to sort the whole array, we would perform some sorting function on it.

In the first step of our algorithm, we sort each string in the array. We have to loop through every element in the array (let's call it's length "a"); then at each step we have to sort a string (let's call the length of the longest string "s"). The best sorting algorithms have a time complexity of s * log(s). And since we have to do that "a" times, that gives us O(a * s * log(s)) for the first step.

For the second step, we have to apply sorting to the array, giving us another a * log(a), but for each of those steps, we have to compare two strings, which is itself a O(s) operation. So that gives us a total of O(s * a * log(a)) for that step.

Depth First Search or DFS for a Graph - GeeksforGeeks

When calculating th big O for different inputs, we use different variables.

We drop O(n) below because it is not the dominant term.

If your algorithm is in the form "do this, then, when you're all done, do that" then you add the run times.

If your algorithm is in the form "do this for each time you do that" then you multiply the run times.

Try to remember this pattern. When you have a recursive function that makes multiple calls, the runtime will often (but not always) look like O( branches ^ depth ), where branches is the number of times each recursive call branches.

When you have a recursive function that makes multiple calls, the runtime will often (but not always) look like O( branches ^ depth )

How many calls are in this tree?

Also, note that the space complexity of a recursive function is O(depth). Although we have O(branches^depth) (O(2^N)calls, we only ever have O(depth) (O(N))calls on the call stack at once (at any given time). We would therefore need to have O(depth) memory available to store all of those function calls.

When you have a recursive function, the memory will look like O(depth)